The bodies of 71 migrants were found yesterday, Thursday, September 22, after their boat sank off the coast of Syria. The budget was announced by Syria’s health minister and could get even worse. Twenty survivors are being treated in a hospital in the Syrian city of Tartus. Authorities said the number of passengers on board could reach 170. These are Lebanese, Syrian and Palestinian citizens, including women and children, and about 120 to 150 people were on board the ship that wrecked yesterday. The cause of the accident is unknown, and rescue attempts are underway. Officials said the boat had departed from Minye, a city near the Lebanese port of Tripoli. 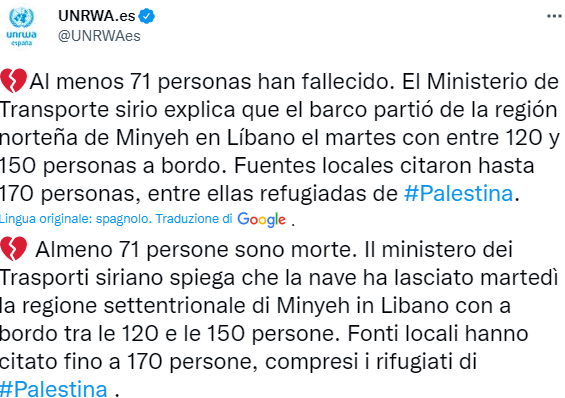 Apparently the ship was heading to Europe. The city of Tartus, where the survivors were transferred, is about 50 kilometers north of the Lebanese port city of Tripoli. According to the United Nations High Commissioner for Refugees (UNHCR), Lebanon is home to about 1.5 million Syrian refugees and about 14,000 refugees from other countries, making it the country with the highest number of refugees per capita in the world. There are many countries. But Lebanon is facing a deep economic crisis, boosted by Covid-19 and her 2020 Beirut port explosion, with more than 80% of her population struggling to buy food and medicine. .

This situation has a significant impact on the immigrant population of the country. Many choose to flee elsewhere, including Europe. early this monthA boat carrying migrants from Lebanon to Europe sank off the coast of Turkey, killing six people, including a child. The country’s coast guard said her 73 migrants out of four boats had been rescued.

Uli Hoeneß was outraged on...
World

Referees prevent brawls on the net

Kissinger commented on US attempts to include Ukraine in NATO

European leaders say everything points to sabotage at Nord Stream