“There is a lack of anger and courage in the widespread protests.”

Muscovites live as if the war had never happened, Dmitry Glukhovsky describes the past six months. it’s over. Mobilization is a shock to Russians. What protests lack to thrive is anger and courage, says the author, who for years has warned in a book about the path to totalitarianism. Wanted since June.

ntv.de: Did the mobilization surprise you?

Dmitry Glukhovsky: It didn’t surprise me, but it scared me. When Putin announced the war, Russia called it a special operation, and many Russians feared a full-scale mobilization. The first wave of departures happened because of this horror, and many of my friends from Moscow were there too.

During the first six months, many Russians had a somewhat schizophrenic feeling that their lives hadn’t changed at all, even though this war was happening far away. Moscow cafes were full. Yes, there were a few more police on the streets, and I saw ads for Operation Ukraine on the trams, but other than that, everyone thought Moscow was the best city in the world.

Reality finally broke into this life on Wednesday. Since then, this war has affected everyone in Russia. Even Moscow people feel it no longer only on TV, but in their own lives. I have friends and acquaintances who have already received draft notifications. They already called you a few weeks ago.

Was the decision to partially mobilize not so short-lived after all?

The convocation has been around for some time, but the passage of the law has proceeded very quickly. If he refuses to be drafted, he faces up to 15 years in prison, and those who surrender as Ukrainian prisoners face the same harsh punishments as they did during Stalin’s time. The Duma, the Russian parliament, unanimously passed the law in emergency procedures on Tuesday. The next day, Putin announced his general mobilization. Day and night, Russia turned into a military dictatorship.

What do young men do with draft notices?

There are now queues at the border. Flights to Kazakhstan and Belarus have been sold out for weeks. Buryats live on the border with Mongolia, are considered fearless fighters, and their homeland is very poor. The army was therefore a good option for young people in the region to earn money, with up to 3,000 euros per month being offered for this task. But the corpses came back, there were many secret burials, and people started talking and understanding. Not enough applicants were found even among the Buryatians when they were still looking for them.

… Buryats are trying to flee across the border to Mongolia. This also shows that war has little support among the public.

But there was little resistance either.

There is fear in Russia and people are very reluctant. Not believing that you can change anything in your own country is a lesson in powerlessness. In the family there are still memories of grandfathers and grandmothers who were arrested during Stalin’s time. Mothers warn their children not to fight back. “You can’t change anything,” she says. On Wednesday alone, 1,500 people were arrested. These people are also convinced that nothing will change. They only take risks out of a guilty conscience.

It sounds so depressing.

Ukrainians accuse the Russians of being too cowardly to fight back, but Ukrainians are fighting for their freedom. But you should also look at: The Ukrainian has experienced the success of his two revolutions. You have very different confidences, you have a very different sense of what is possible. Vladimir Putin never changed his plans and never abandoned anything. Losing a war he personally started is unacceptable for Putin. So now he has to up the ante again. Don’t show your weakness.

But that’s exactly how he shows a lot of weakness.

Yes in the eyes of the West, but not in Russia. Putin’s magic is not based on truth. It is built on lies and cannot be countered by truth. He exudes his power and draws to the weak. When you look powerful even when you lie, people don’t care if what you say is true. They are not looking for truth, they want to get closer to the source of their power and feel its magic. But as soon as Putin’s military showed weakness in Ukraine, the magic began to wear off. He cannot risk it.

But again, it must be made clear in Russia that mobilization will only be carried out if necessary. Because things are not going smoothly right now.

Do you think the protest will spread?

For that, you need to make sure: There is absolutely no organized resistance in Russia. Opposition leaders are either in prison or abroad. For example, I myself have already been searched and wanted for just posting a critical post on Instagram.

Is that why the publisher sent us the meeting location via secure messenger instead of email?

We are taking certain precautions. It may not be necessary, but you don’t have to take chances. I can no longer live in Russia. The state has once again shown how oppressive it is this week. already fParticipating in street protests can result in prison sentences of up to 15 years in prison. There is anger and a lack of courage in the widespread protests.

How are critical voices and reports spread?

on Youtube and Telegram. The Kremlin did not dare to ban YouTube, and members of the opposition and journalists from abroad report there. Telegram channels critical of the regime may have over 1.5 million subscribers. Information will be sent to those who want it. But resistance is dangerous.

What is the risk of being pulled over by the police during a protest march?

You don’t even have to pull it out. In the big cities of Moscow and St. Petersburg, cameras monitor public spaces. At least 160,000 are in use and linked to facial recognition software. The Moscow metro is cashless. Everyone will be recognized and the fare will be automatically deducted from your account. When the system finally recognizes you in the demonstrator, you will receive a call later. And now this is the latest. Protesters will then receive notice of the recruitment. 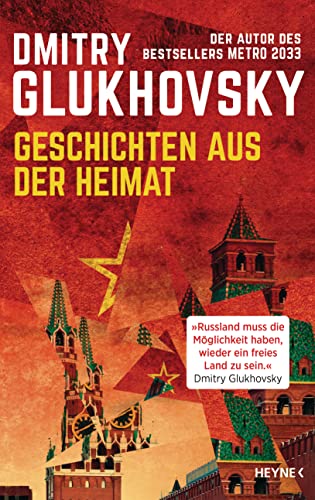 to the offer amazon.de

But from a military point of view, brigades composed mainly of anti-war demonstrators are also not real assets.

On the front line, there are few opportunities to resist. And you are always good cannon fodder. All this can be explained in a book or talked about, but nothing will change. Even if my Stories from Home, which ironically and figuratively deals with the situation in Russia today with its censorship, repression and corruption, sold millions of copies, it would be nothing compared to talk show audiences. Apparently, every generation has to make its own mistakes. She learns the value of freedom only after experiencing this loss herself.

- Advertisement -
Share
Facebook
Twitter
Pinterest
WhatsApp
Previous articleA young woman breaks the reform that some workers have done in her bathroom after discovering that they have left her cat inside the wall
Next articleX Factor 2022, Episode 2: Fedez Talks to Competitor’s Grandmother

Liz Truss got off to...
World

Sergey Yuran is ready to lead the Russian national team

The head of the Estonian Foreign Ministry said that the country will refuse Russian gas from January 1, 2023